Bloomington, MN—Many families feel the direct impact of current political discussions and enforcement directives surrounding immigration. For local children who fear their families will be separated by detention or deportation, it can be difficult to deal with the resulting anxiety. 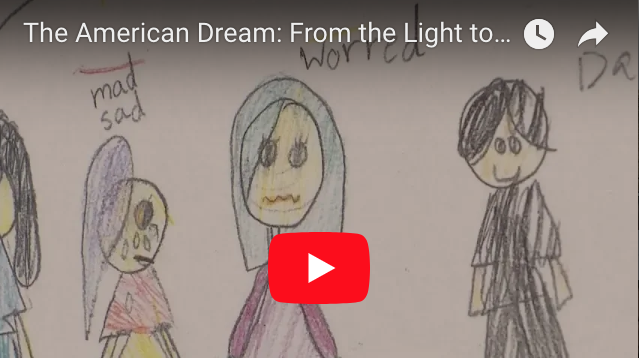 A group of community members realized that this was having a negative impact on the overall health of children of immigrant families and wanted to do something to help. It started when a pediatrician suggested the group use art to address the children’s distress. Kids were asked to draw or express in words their perception of U.S. Immigration and Customs Enforcement (ICE) and the impact it has on their lives.

The resulting art was shared for the first time at a City-facilitated community immigration forum where residents and representatives from local organizations, City staff and the Bloomington School District were present. Bloomington’s Public Health staff also requested the Human Rights Commission include the children's work in its 2018 work plan which went on to receive City Council support and approval. Community members named the exhibit, developed the narrative and selected the artwork to display.

This exhibit was made possible by the Bloomington Human Rights Commission, Artistry, the faith community, Public Health, Hennepin County Library and Creative Placemaking.

How to increase digital equity for entrepreneurs and small businesses: recommendations for local government.

How Durham Provided Legal Relief to More Than 35,000 in Two Years

In 2018, the City of Durham, NC launched an innovative new program in partnership with our Courts, District Attorney, and multiple community partners called the Durham Expunction and Restoration (DEAR) program to remove barriers to employment caused by license suspensions and criminal records.

Hear from the City of Grand Rapids, MI as they discuss lessons learned from Bridge GR, an event series championing economic vitality and diversity in their community.

Learn how municipalities have created and structured positions focused on diversity, equity, and inclusion.